I've got a Crystal Report which I made in

CR2008
, which I'm printing from my
vb.net
application. In this report, I have an image and a formula field.

The image formula (Under Format Graphic > Picture > Graphic Location is set to be the formula field called
@imgLocation
.

In my
vb.net
code, I have the following block to select the saved file path from the database, then fill
@imgLocation
with this value, to set the image that is being shown.

Why is the index changing, and what is the way around it?

I tried using the named parameter option, but
FormulaFields.Item("@imgLocation")
gave me an error of

As per @Bugs request, this is the report showing the correct string and image

Then, after deleting and re-saving the image (But in a slightly bigger size), the parameter was passed correctly still, but the placeholder image was shown instead.

This makes me think now that it's to do with image size, however, re-sizing it back to the original size still didn't show it again.

Could it be do to with the fact that I'm loading a new form which contains the report viewer, rather than opening it from the same form?

Please note my answer is addressing the part regarding adding parameters. For the moment the no image available placeholder is proving difficult to resolve on my side.

Note that if you are passing parameters and they are shown on the report, make sure you don't have cReport.VerifyDatabase() in place. This often throws up a dialog box asking for the parameter values. 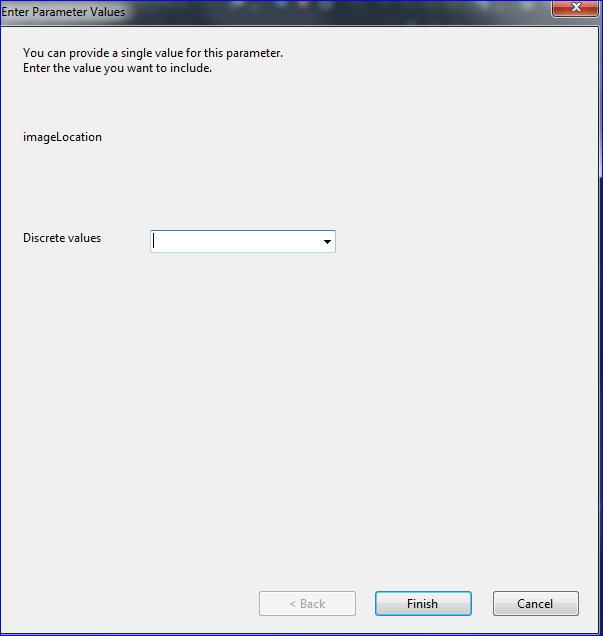 By not calling cReport.VerifyDatabase() this will stop the dialog box from showing.

Now through Crystal Reports you can set the Graphic Location using a parameter. To do this, add the parameter to the report and suppress the field (as you don't want to see it). Then you can add the Report Field as the location.

This however does not seem to work through VB. The ReportViewer does not handle the change of images. Instead you are left with the default image. I'm unsure why this is the case and I'm guessing it's a bug with Crystal. If anyone knows of why this happens, feel free to comment.