How is a Vector of Vector aligned in memory?

then resize the first level by

and push element at the 2nd level:

But how are vector of vector aligned in memory?

For simple vector, it's a container and align its element continuously, like an
array
; but in the case of vector of vector, I couldn't see the picture.

The size of the vector<int> struct that is stored in ref is constant. Common implementations has this at around 12 bytes.

Each element/vector<int> in ref manages its own integers independent of the elements ref manages. In the artistic rendering below ref.size() == ref.capacity() for the sake of simplicity. 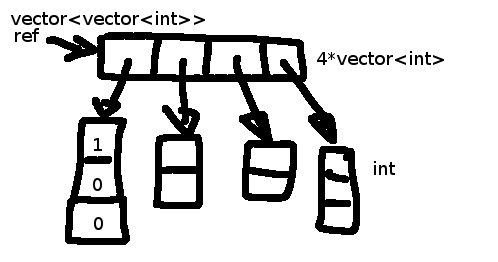 only affects the top row. Your

only affects the i-th column.

Email codedump link forHow is a Vector of Vector aligned in memory?