At what point in a function call is an AJAX request actually initiated by the browser?

Let's say I have a function that does a standard AJAX request:

This code will cause the browser to start an AJAX request, but at what point in the function does the request actually start? According to this post: https://blog.raananweber.com/2015/06/17/no-there-are-no-race-conditions-in-javascript/

[Calling
xhr.onreadystate()
after
send()
] is possible, because the HTTP request is only executed after the current scope has ended its tasks. This enables the programmer to set the callbacks at any position he wishes. As JavaScript is single-threaded, the request can only be sent when this one single thread is free to run new tasks. The HTTP request is added to the list of tasks to be executed, that is managed by the engine.


But when I add a breakpoint in devtools right after the send call:

I do get a network request, albeit in a pending state:

But if I comment out
xhr.send()
so that only
.open()
is called:

Then I get no pending network request:

Thinking that perhaps I need the function scope to end in order for the request to actually be sent out, I moved the breakpoint to after the function call (and modified the code a bit to see the XHR readyState): 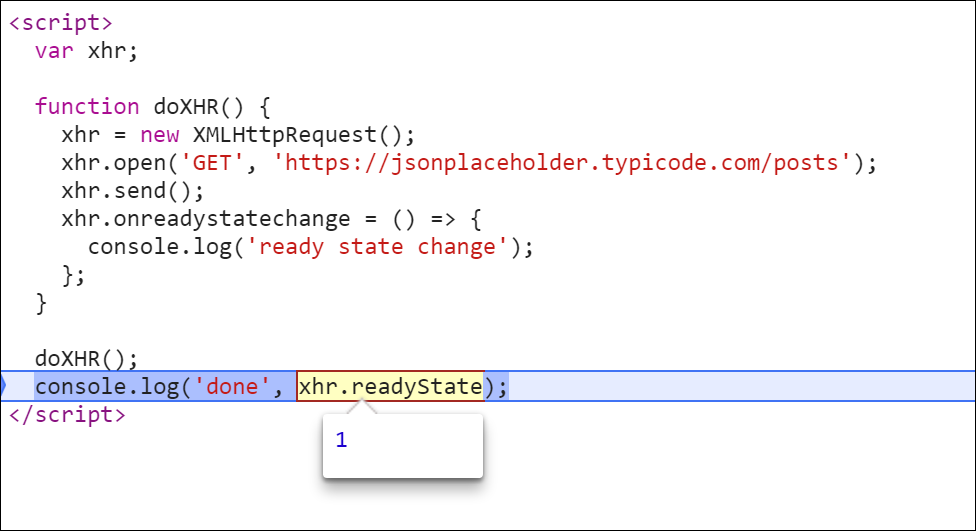 But I still get the pending network request:

It seems like the debugger not only freezes code execution, but also any network requests. This makes sense, as you don't want network requests to complete while you're on a breakpoint, but this also makes it impossible to tell when the network request is actually initiated.

send immediately initiates the request. This is at least hinted at by MDN's documentation for send.

The author of the blog you link to is correct that there are no race conditions per-se, but that does not keep you from having things happen out-of-order. An example of this would be if you load multiple <script> tags in with the async=true set on them. In this case, if one script depends on the other, you could end up in a situation where you have an unpredictable sequence of events (which is very similar to a race condition) because two asynchronous events finish at different times.

It is important to note, that networking itself is not handled in JavaScript, but rather by the browser implementation, which is native code, and could be multi-threaded (although I do not know if it is). This means that the browser is perfectly capable of handling network tasks while your javascript is running.

Email codedump link forAt what point in a function call is an AJAX request actually initiated by the browser?