I'm trying to get an app to compile that uses the

android-support-v4.jar
and the
Fragmentation
classes it contains, but I keep getting messages whenever I try to compile that there are errors in the code. All of the errors have to do with different
Fragmentation
classes that are in the
.JAR
. I have tried
ctrl-clicking
the project folder and then selecting
Android Tools -> Add Compatibility Library
and I keep getting this error:

Why would it be looking for the
.JAR
in Eclipse's Package Contents? I've gone into the project properties and went to the Java Build Path, and imported the
.JAR
from the
MainActivity/libs
folder, that didn't work, and then I tried to import it from my SDK directory, and that didn't work. I've fixed the project properties and cleaned and built it countless times, I've restarted Eclipse, my computer, re-downloaded and installed Eclipse, the Android SDK's and ADT and still nothing. I am completely stumped.


I've gone through the build path and imported the .JAR from both the
MainActivity/libs
and my SDK directory. For the hell of it I added the .JAR in the directory that keeps appearing in the errors and that hasn't worked. What's making Eclipse look for it in it's Application Package Contents?


So after tinkering the project contents aren't showing any errors but the MainActivity folder still says that there is one and I still can't compile. 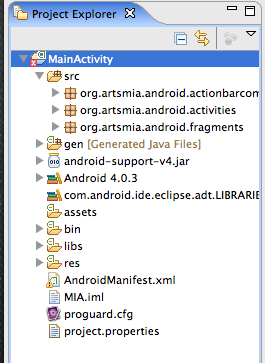 
So I think the question may be "Why is Eclipse looking for the .JAR in the Eclipse Application's package contents instead of the
libs
directory of the project or the Android SDK directory that I used to import it as an external .JAR?"


I am only getting one error now after tinkering, it's on this method:

The Quick Fix says that I should delete the @Override annotation but that method must override a super class method.

These are the errors that it shows:

It turns out that my Debug Certificate had expired so I just needed to delete ~/.android/debug.keystore and restart Eclipse and everything worked.