I was reading through a website named w3schools and was taking the HTML5 lesson. There I saw a number of deprecated tags in HTML5 that were before accepted by HTML4. One of its tag were

<applet>
! So are now applets of no use?

You can see it here: HTML5 New Elements(at the end)
or here: 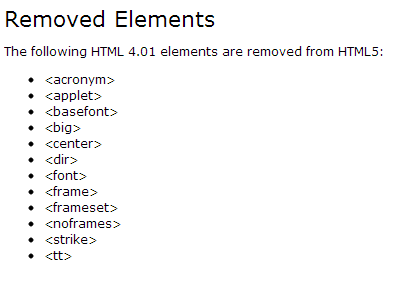 Applets (as applications written in Java and intended to run inside a browser) are not deprecated in any way in HTML specifications or drafts. There is decreasing interest in them, due to many other alternatives being available, but that’s a different issue.

The applet element was declared deprecated in HTML 4, in favor of the object element. In HTML 4, deprecation means that element is still part of the language, browsers are recommended to support it (though in practice, not all browsers support it, and some browsers could not support it), but there is a recommendation to use something else (in this case, object) instead of it.

In HTML5 CR, the word “deprecated” is not used. It uses the term “obsolete”, which means in principle something quite different but comes very close in practice. In HTML5 CR, the applet element is declared “entirely obsolete and non-conforming”, with the note that it “must not be used by authors”. Yet, HTML5 contains a definition of applet under “Requirements for implementations”. And HTML5 conformance requirements specify that normal browsers must (not just should) support it.

P.S. W3schools should not be used as any kind of authority or reference, see http://w3fools.com