I have data wherein I have a variable 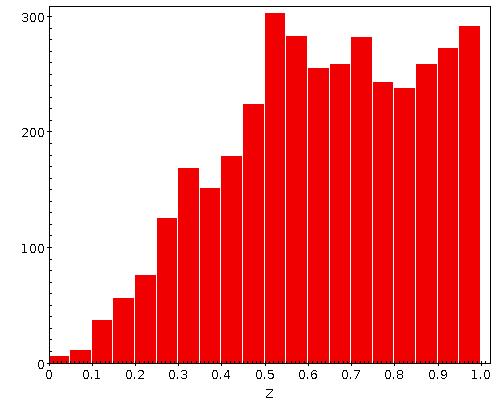 Now I need to generate a random variable, call it
random_z
which should replicate the above distribution.

Is there another way to go about generating this distribution in Python?

If you want to bootstrap you could use random.choice() on your observed series.

Here I'll assume you'd like to smooth a bit more than that and you aren't concerned with generating new extreme values.

Use pandas.Series.quantile() and a uniform [0,1] random number generator, as follows.

If you'd rather use numpy than pandas, from a quick reading it looks like you can substitute numpy.percentile() in step 2.

From the sample S, pandas.series.quantile() or numpy.percentile() is used to calculate the inverse cumulative distribution function for the method of Inverse transform sampling. The quantile or percentile function (relative to S) transforms a uniform [0,1] pseudo random number to a pseudo random number having the range and distribution of the sample S.

If you need to minimize coding and don't want to write and use functions that only returns a single realization, then it seems numpy.percentile bests pandas.Series.quantile.

Let S be a pre-existing sample.

u will be the new uniform random numbers

newR will be the new randoms drawn from a S-like distribution.

I need a sample of the kind of random numbers to be duplicated to put in S.

For the purposes of creating an example, I am going to raise some uniform [0,1] random numbers to the third power and call that the sample S. By choosing to generate the example sample in this way, I will know in advance -- from the mean being equal to the definite integral of (x^3)(dx) evaluated from 0 to 1 -- that the mean of S should be 1/(3+1) = 1/4 = 0.25

In your application, you would need to do something else instead, perhaps read a file, to create a numpy array S containing the data sample whose distribution is to be duplicated.

Here I will check that the mean of S is 0.25 as stated above.

get the min and max just to show how np.percentile works

The numpy.percentile function maps 0-100 to the range of S.

This isn't so great if we generate 100 new values, starting with uniforms:

Now we have a numpy array. Let's check the mean of the new random values.