I have an iOS component which relies on the Stripe iOS SDK, Project A. I included the Stripe SDK in Project A in Xcode and it compiles fine.

However, I'm building another project in Xcode which relies on this component, Project B. I added Project A to Project B's libraries. Project A relies on project B but does not rely directly on the Stripe SDK.

Now, whenever I try to compile Project B, I get this error:

This line (inside Project A) seems to trigger the error:

Xcode has no trouble finding
Stripe.h
. I tried adding the Stripe SDK directly to Project B as well. I've double and triple-checked the Build Phases -> Link Binary With Libraries section for all targets (
Stripe.framework
is listed).

I added the Stripe framework manually, so then I also tried adding it with Cocoapods instead, but that also didn't work.

Here's the project structure for Project B ("example"), with Project A ("RCTFBLogin") below it. 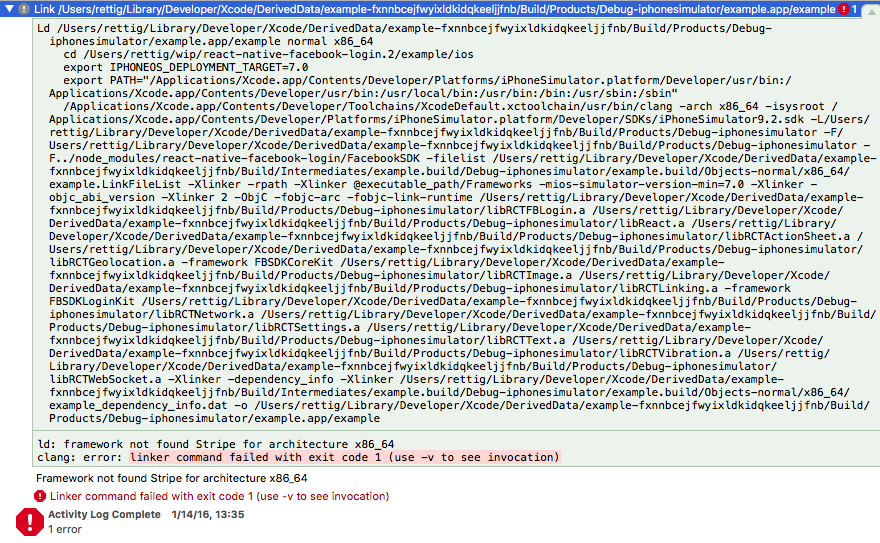 I'm using Xcode 7.2 and the most recent version of the Stripe SDK (6.0.0). The same Stripe framework code works fine in another project.

Update: I added "
$(SRCROOT)/../..
" (since Project B lives two folders deep inside Project A) to "Framework Search Paths" under Build Settings -> "Search Paths" for the Project B target and it began compiling successfully. However, I now get this error when running:

I had to do two things to get this working: