Why does Git tell me "Not currently on any branch" after I run "git checkout origin/<branch>"?

I was trying to follow the instructions from Git: "Not currently on any branch." Is there an easy way to get back on a branch, while keeping the changes? but

git checkout
appears to be broken:

More specifically, I'm worried about the "Not currently on any branch" message.
git checkout
doesn't seem to do anything here... Isn't the entire purpose of that command to put me on a branch? How can I get back on a branch and commit/push again?

The output of git status indicates that your working directory is clean; good.

you are attempting to check out a remote-tracking branch, called origin/web-zach; it's a special type of branch, local to your repo, that keeps track of the corresponding branch, web-zach, living in the remote repository called origin. 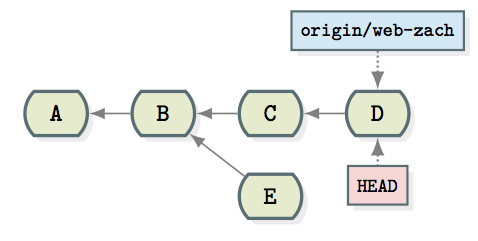 When HEAD does not point to a "normal" local branch, but points to a commit directly, you end up in so-called "detached-HEAD state". It's not the end of the world, but avoiding landing in that state as much as possible (at least at the beginning of your Git learning) will likely spare you some surprises.

To remedy the situation, you need to reattach HEAD to some local branch. Here, you may want to create and check out such a local branch, by running, for instance

HEAD will then be pointing at the newly created local branch called web-zach: 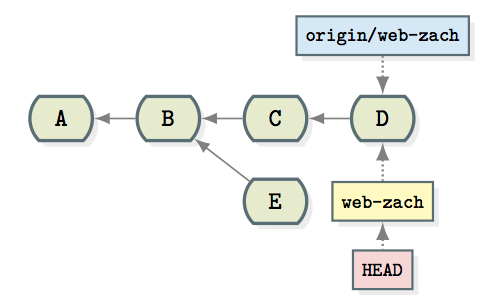 Then, you should get

After that, you'll be free to make changes, stage them, commit, and (if you have write access to the remote repo corresponding to origin and no one else has pushed anything to origin/web-zach since your last git fetch), push, using

Email codedump link for Why does Git tell me &quot;Not currently on any branch&quot; after I run &quot;git checkout origin/&lt;branch&gt;&quot;?