SQL group by not working (from 3 queries) 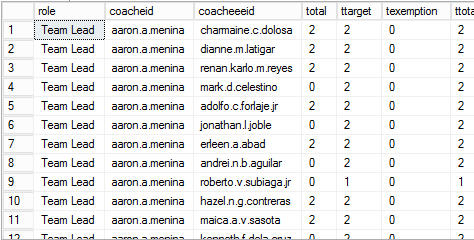 My question is, what method should I use to have it in group? I already tried group by but it's not working. I wanted it to group by role, coacheid and their total coaching (total column). Whenever I try to use GROUP BY role,coacheid, coacheeeid on the end statement of the final query, all I get was "Ambiguous column name 'role'" and "Ambiguous column name 'coacheid'"

'Ambiguous column name' means, you forgot to specify table name in front of the column. Choose one and put it there (GROUP BY).