I am wondering what is the best design approach between using a big state (store) and sql request in database.
Let's say you have a Todo CRUD application. You can save the Todos list in store within Redux implementation. What is the best approach if you want to make complex statistics on those TODOs: Reducers or sql requests?

For example, you want to get all todos for the current month:

Let's say you have a Todo CRUD application. You can save the Todos list in store within Redux implementation. What is the best approach if you want to make complex statistics on those TODOs: Reducers or sql requests?

I guess when you mentioned the database (SQL requests) you considered Restful programing.

For the very simple applications, the Redux pattern doesn't have that much sense, unless you need advanced visual effects.

However, small applications do grow over time and can become medium scale fast, by adding more components.

Having 2 components A and B you have just a few possible update chains.

A updates B and B update A, or self-update (not including in here the updates from outside of the app). This is the possible case.

With just three components interacting we have much more possible chains.

And with even more components it gets complicated. We eliminate the possible exponential interaction complexity with the Redux pattern. Redux pattern is similar to IDispatch, IObservable if you worked with these interfaces from some other programming languages.

One would be for spitting the actions, and the other for entering the listener's chain that exists inside the store.

We get very similar to the event driven approach in GUI applications — when you move te mouse you get the events.

In React components create actions. Sometimes a lot of actions. In fact, you may get so many actions in some cases so the application will freeze if you have the bad design.

Typically components should throttle the actions and there are great solutions in React for that.

So what are components in React? From one side components fire actions and on the another side they get the props, possible context, possible the application state or even local state. Finally, components may have the rendering logic. 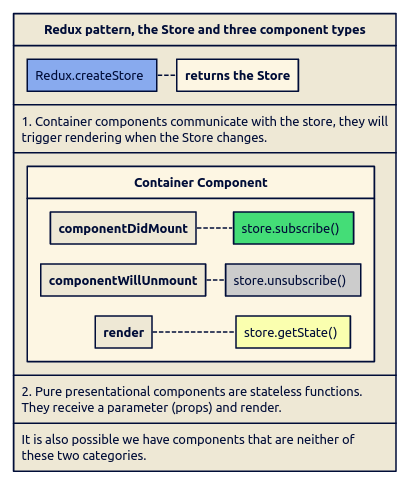 I just wrote this to represent the initial complexity or Redux pattern while restful applications are by design simple.

I think that this is the main factor you should take into account. Using Redux for the trivial TODO applications that will never grow the complexity may not be needed, so you may go with the Restful app.