Being new to Android developent I followed the simplest of tutorials, built a new android project, accepting all default (built it for kitkat). To my dismay I have an un planned project - appcompat_v7, along with the errors:

and twice the following

The project cannot be built until build path errors are resolved

Is there a quick way to fix these?
Is this a sign of how difficult, and bugged with unpleasant surprises learning Android is going to be?

(Hope it will not be similar to learning IOS 6 years ago...)

1. Ensure that you have the Android Support Repository installed in your SDK Manager: 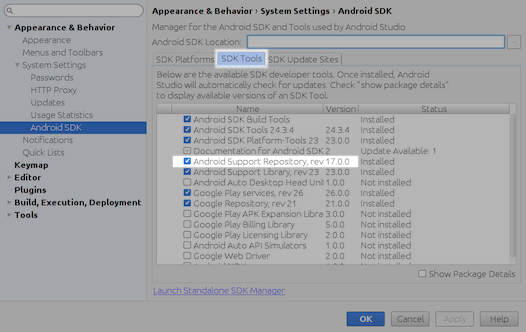 2. In your build.gradle file, include the following compile statement

in the dependency bracket.

3. Perform a Gradle sync with the Sync Project button.

The trick is, you need to clean & build the appcompat_v7 project. Go to

After doing this, if the project does not get built automatically, right click on the project in the package explorer and select Build Project. Now the .jar file will be generated in the project's bin folder. After that, clean & build all projects that reference appcompat_v7.

Now the library should be correctly referenced by all projects that need it.

1. How to add Android Support v7 libraries in eclipse.